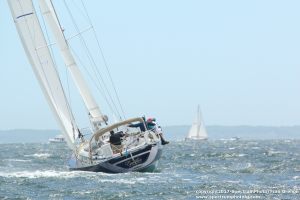 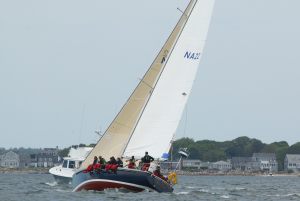 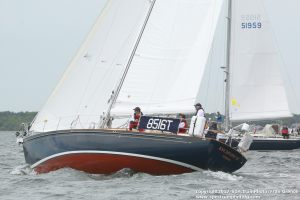 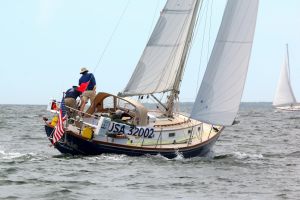 On the afternoon of Friday, June 9 the nearly 50 yachts competing in the 40th anniversary edition of the Marion-Bermuda Race beat into a freshening Buzzards Bay southwesterly breeze. Nearly two years prior the Marion-Bermuda Trustees had decided that this race would start a week earlier than usual. Their reasoning was that since Bermuda had been chosen to host the 35th America’s Cup races, and the finals were set to run in the second half of June, Marion-Bermuda competitors and their families could arrive in Bermuda and enjoy watching the AC foiling catamarans rip across the Great Sound. Many did, and all enjoyed the spectacle.

As usual, the Class D boats started first. The noon-time breeze was blowing a moderate 8 knots. Classes C and B followed, crossing the start line off Sippican Harbor at 20-minute intervals. By the time the big Class A boats were underway, it was nearly 1:00 PM and the breeze had built to 18 knots. Had these brisk conditions prevailed over the entire 645-mile race course to Bermuda, it’s likely that one of the Class A yachts would have won the overall title. But the Atlantic Ocean, its Gulf Stream, and ocean racing in general are fickle things.

For example, in the 2011 race, the wind held through at least Monday all the way to Bermuda. But in 2017 competitors ran into a “wind hole” two-thirds of the way down the race course. In that breezy 2011 race, 72-foot ‘Lilla’ won both on corrected and elapsed times. In fact, ‘Lilla’ smashed the course elapsed time record. In contrast, this race would be won by the Class D yacht ‘Selkie’, a Morris 32.5 skippered by Chip Bradish.

The fleet was well-spaced as boats crossed the Gulf Stream on Saturday night through Sunday. The Stream was reasonably placid as the wind continued out of the southwest and ran with the current. ‘Selkie’ was in the back of the fleet but sailing well. Bradish also had elected to use celestial navigation giving him a 3% handicap time bonus over the GPS-navigated yachts in the race.

What Bradish couldn’t have known was that ahead of ‘Selkie’ and the other smaller boats, the rest of the fleet, including the fast Class A boats, were nearly becalmed. The north wall of the Bermuda high had oozed northward, causing a zone of dead air to form up across approximately 35°N, 250 NM from the finish line. As the larger boats wallowed in the wind hole, smaller boats caught up. When ‘Selkie’ and the other Class D boats reached 35°N, the wind hole resolved, a breeze filled in from the south southwest, and the Marion-Bermuda Race had a second start.

‘Selkie’ stayed with the fleet and finished at about 1:00 AM on Thursday morning winning on corrected time. She finished a mere 12 hours after first-to-finish ‘Jambi’, a brand-new Hinckley Bermuda 50 sailed by John Levinson.

The 2017 had one of the most bunched finish sequences in race history. Of the 47 boats that crossed the starting line, 41 finished. Of those, all but 9 finished on Wednesday June 14. The remainder finished on Thursday the 15th.

The Royal Hamilton Amateur Dinghy Club hosted the prize-giving ceremonies on Saturday evening, June 17th. The awards and reception following were enjoyable celebrations with food, music (including a performance by Bermuda’s unique ‘gombey’ dancers) and great camaraderie. Unlike other ocean races that finish in Bermuda, participants in the Marion-Bermuda Race, as well as their families and friends, enjoy staying on the island for several days to celebrate and honor the race and its winners. In addition, the entire nation of Bermuda was in a sailing mood given the exciting America’s Cup events then capturing international attention.

Each Marion-Bermuda Race is different. Success in the 2017 Marion-Bermuda Race required skillful and attentive light air sailing. The largest and smallest boats all had a good chance. In this race, ‘Selkie’ had the patience, and guile, to take the overall prize. We all look forward to 2019.